Adult Rehabilitation: How Working with Adults Enriches the Therapist 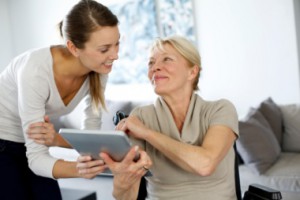 In order to become a Speech Therapist, you go to school for a long time. And after you’ve graduated, you tend to think “I’ve arrived!” Of course after the first week at your first job you find out you are just beginning.

There is nothing like day to day contact with adults who have to start over to teach you that. I have worked with adults after a head injury, geriatric patients after strokes with dementia Multiple Sclerosis, ALS, and Parkinson’s disease. And I have worked with patients on hospice. But my experiences with all of them helped me be a more flexible, giving therapist and person.

A Glimpse into My Professional Life & how it has Been Enriched

I used to work with a man named “Bill”. He was 80 and had a stroke. He was aphasic and apraxic. Not only could he not easily retrieve the words he wanted to say but his brain could not direct his tongue where to go in his mouth to say them. When I met him, he always smiled and said “Well.” That was the word he had (besides some choice swear words!)

I would hold his good hand and swing it back and forth and we would sing “My name is Bill, how are you?” He could sing this and his wife of 60 years was always supportive. He vocalized and pointed to pictures for needs and we practiced singing. Bill and his wife showed me the strength of a great marriage and a great attitude.

Then, there was Tanya. Her reward to me was a lesson to pass on to my children: how bad decisions in your youth can negatively impact the rest of your life. She was 22. She lived in an institution for patients with mental illness and medical issues. After destroying her brain function through drug use, she had no judgment and poor word retrieval. She had plans to break out and go back to work, but I freely admit that I could not help her.

And finally, there are my dementia patients. From them I have learned the power of relationships and memories. Whether the memories and relationships are good or bad they define us.

I have worked with patients in nursing homes and reviewed memory books with them. With the books, we go over where they are living now and why, who is in their family, etc. Some of these patients cry and begin to try to talk again when seeing the picture of a loved one who has passed away in their book.

The patients carry their books with them like a security blanket because the book can come to represent what is left of them and for them – it becomes their anchor.

The Population Continues to Age

Data from The Department of Health and Human Services indicate that “The older population – persons 65 years or older – numbered 39.6 million in 2009” (the latest year for which data is available). They represented 12.9% of the U.S. population which is equivalent to about one in every eight Americans.

Our growing field of professionals will continue to be enriched by more adults as they touch lives and help people get back on the road to speech recovery.